Do Try this at Home: A Vday Cocktail from the Heart


My mother's father, John Watson was born in rural Alabama during the early part of the 20th century. He was a passionate storyteller, a loving grandfather, and a fan of the sauce, especially (as I recently learned) Four Roses Bourbon. He coined the term "hoop-n-doop" for his bourbon or actually any soothing drink, even going so far a jokingly applying it to a baby's bottle. So when I learned Four Roses was having a Valentine's Day cocktail contest, I jumped at a chance to pay him a bit of posthumous homage through a passion we share. A riff on the Old Fashioned, it includes one of his favorite condiments, Alaga Syrup. Without further ado: 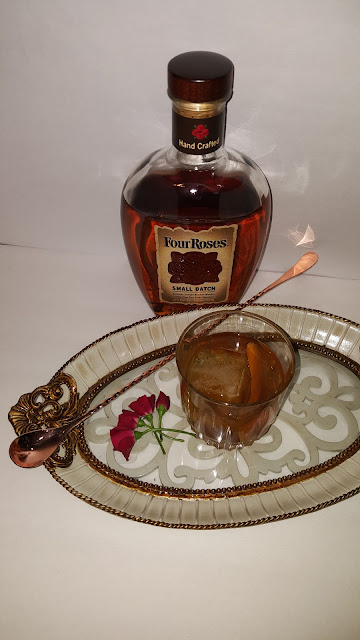 Method
Blend Alaga and Four Roses Small Batch Bourbon over ice and add bitters. Stir with a barspoon and then pour over large ice cube into rocks glass and garnish with orange peel.

In this picture, I used a glass from my grandmother's house. I'm pretty sure he sipped from it at some point. I also chose four small rose buds because his nickname was Buddy. Cheers, Granddaddy!
Yours Shoely, Nafeesa