Cocktails, Confessions and a Celebrity Chef

Do you remember playing Mad Libs as a kid? Were you good at it? Well, if you’ve held on to those skills, they can earn you and 24 of your friends an ultimate Girls’ Night In from Van Gogh Blue Vodka. Just visit the Van Gogh Blue Facebook fan page, become a fan and enter the “Cocktails and Confessions” contest. Here’s the fun part, you enter by filling in the blanks on a Mad Libs-like story about you and your friends. Entries will be judged on originality, humor and creativity, so get cheeky with it. The winner will receive a $500 American Express gift card and a night of fun and fine dining on food prepared by celebrity chef, Jon Ashton. Just promise to invite me if you win, OK? (This contest ends December 13th and is only open to US residents 21 years of age or older)

Shoes Clues: Where to Design your Own Shoes Online

Customizable Chaussures
I’ve recently noticed a number of sites that allow users to design and buy their own shoes (some sites will even allow others to buy the shoes you design, too). Though I haven’t created my own pair yet (but probably will soon), here are a few sites I’ve come across.

Jen + Kim: You can either select from shoes they’ve already designed (like the CeCe sandal pictured), or choose the color, material and other details to individualize the look. Then contact the company with your request.(Some time ago, S&B featured their Melrose Pump Remember?). Prices start at $465.

Jeff Silverman: This site’s mantra is “You desire it. We make it.” You can shop their collection (including the Birthday Girl, designed by Gala Darling, one of my fave bloggers), customize styles they’ve already designed or upload images and combine aspects of shoes you like to create your own design. Prices start at $100, and if other people buy a shoe you design, you get paid.

Milk & Honey: Shop their ready to wear collection (which includes the No Place Like Home Pump pictured) or design your own shoes. Start with a classic silhouette and select the color, material, accents and heel height to make a shoe all your own. It’s a little tough to know exactly what your shoe will look like, though, because the display heel height doesn’t change as you modify your design. Prices start around $200

Nina Shoes: If you want to add your own touch to a fancy pair of satin shoes, this is the site for you. You can choose from a variety of colors, add jewels, select a heel height and add other customizations. (I played around and came up with this version of the Electra.) Prices start at $125.


There are plenty more DYO (design your own) shoe sites out there, I’m sure. Have you tried any of them? How was the outcome? I’ll let you know if I end up creating my own wearable masterpiece on any of these websites.


Technorati Tags: design your own shoes,shoes,fashion,customizable heels
Yours Shoely, Nafeesa 6 comments: Links to this post 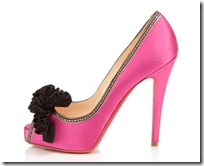 According to Footwear News, Christian Louboutin is releasing a limited edition style silk satin peep toed platforms called Peace of Shoe. Proceeds from the sale of the shoes, of which only 33 pairs were made, will go to the Grameen Foundation and benefit its microfinance program that provides poor people with access to loans that enable them to start and run small businesses.

The shoes come in three colorways, each to be sold in a different one of Louboutin’s U.S. stores. The champagne color will be offered in New York, the lavender in Miami and the pink in Los Angeles. Each shoe is numbered and signed my Mr. Louboutin himself, and they’ll retail for $1495.

And Then A Hero Comes Along...
I have a cousin who's currently serving our country in Afghanistan. She's one of the strongest women I know (for more reasons than I'm willing or able to list here), and I not only appreciate her service to this country, but admire her. She's been through so much, and yet she keeps going, encouraging, supporting. Today's post is in honor of all veterans, but it's especially dedicated to her. It's almost time for her to come home, and I can't wait. 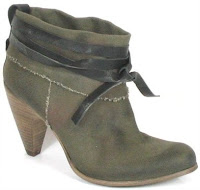 It may have seemed like a long week for many of us, but try comparing that to life in a war zone, across the world from the people you love most. You have to be mentally tough and emotionally... well I don't even know the word to describe what you'd need in that department. You learn to live without certain luxuries (my cousin's really looking forward to getting her hair done), and your life is in constant jeopardy. Still, my cousin is compassionate and fun-loving. When she's stateside, she's stylish and feminine... but also tough. This Invince Able bootie by Bronx (available via csnstores.com), with its ruggedly feminine appearance reminds me of her. The 3.5 inch heel is lower than what she'd wear for a night out, but it's comfortable, like her company. The distressed canvas, like her heart, has been through quite a bit, but that treatment is what makes it unique.

Tonight at happy hour, be sure to toast the past and present veterans who have put their lives on the line (and sometimes lost them) in service to our country. Drink a Chocolate Soldier (recipe & image via absolutdrinks.com) in their honor. It combines Remy Martin Cognac, dry vermouth, dark cacao liqueur and orange bitters for a cocktail that's slightly sweet, plenty strong and full of characters (just how I like a man in uniform). Be careful not to drink too many of these, though. Seriously, one girl can only take on but so many soldiers- even when there's chocolate involved. 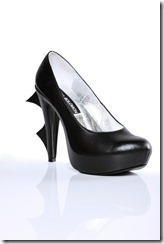 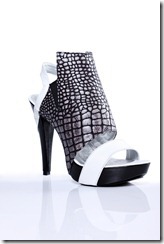 Shoe News: Mel B. for ShoeDazzle.com

Adding Spice to the Dazzle 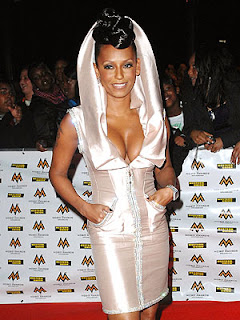 Former Spice Girl and DTWS contestant, Melanie Brown (F.K.A. Scary Spice, A.K.A. Mel B.) has joined an ever-growing list of celebrity guest designers for Kim Kardashian's online shoe shopping community, ShoeDazzle.com. The shoe, a nude pump with a bejeweled heel, was designed with with input from patients at the Children's Hospital of Los Angeles, who requested that they "go with everything" and be "soft and comfortable" on the inside. The shoes will be available in March 2011, and partial proceeds will go to the Children's Hospital of Los Angeles and Ronald McDonald House. Stay tuned for images closer to the release date.

Sole! To the Highest Bidder

What do you do when you have too many shoes? I know... there really is no such thing. However, those who can't use their oven as extra storage space a' la Carrie Bradshaw and who don't have Mariah Carey cash to get shoe rooms built will eventually need to clear space for new shoes. Yes, you could donate them and hope the karma points add up to a financial windfall, or you could have a yard sale and watch skeevy strangers paw all over your Pradas and offer mere pennies in payment for them. However, there's another option: IfTheShoeDoesntFit.com. It's an online shoe auction website that makes it "easy and affordable to sell, swap and shop for shoes" (their words). I checked it out, and it's pretty cool (plus the game on there is addictive). Their fees are lower than a lot of other auction sites, and I think the swap option is unique.
I'm actually doing a bit of purging (and selling) these days- partially to make room for new goodies, and partially to bring in a few more bucks for holiday travels and shopping. I'll be auctioning off a few pairs of my shoes on IfTheShoeDoesntFit.com. So far I've only managed to take pictures of 3 pairs- none of which have been worn more than three times. (Selecting which shoes to let go and then photographing them is hardest part, right?) Clockwise: Unisa ballet flats, BCBG silver wedges, Joey O purple snake embossed sandals. 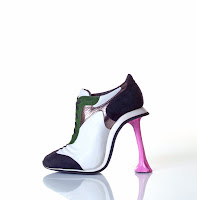 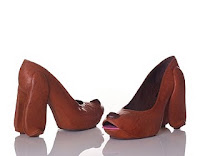 Israeli shoe designer, Kobi Levi seems to take his cues from everything but the fashion world. With inspirations including bananas, pets, to slingshots, stepping on gum and NSFW images, his designs are unique to say the least. The question, though, is whether or not they're fashionable. Could you wear them? To where? With what?
Yours Shoely, Nafeesa 3 comments: Links to this post