Fashion VIPs have descended upon Milan to see the Italian interpretation of Fall 2012 fashion. Since this is known to many as the shoe capital of the world, I figure we’ll be riveted to the models’ feet. For the first day, only two designers grabbed my attention, though. 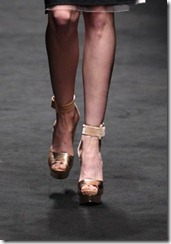 Alessandro Dell’Acqua is said to have been inspired by Queen Elizabeth for his No. 21 Fall 2012 collection. While the clothes were a loose reflection of that inspiration, the shoes… well, not so much. Still, I’m a sucker for a metallic peep toe platform with an ankle strap. **Photo by Piero Cristaldi via WWD 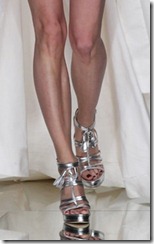 John Richmond said his Fall 2012 ready to wear collection had gothic and punk influences. However, suiting, dresses and gowns that read borderline bridal all seemed more buttoned up than emo-dark. The shoes weren’t very rebellious, either. A metallic platform gladiator-ish sandal with tasseled ankle ties seems more goddess than goth, no? **Photo by Piero Cristaldi via WWD