Not too long ago, I received a pitch for a “quiet heel,” as in one that doesn’t click-clack loudly when you walk. I was a bit skeptical, but I accepted the request to review a complimentary pair of Ssh-oes by Mary Arnett. 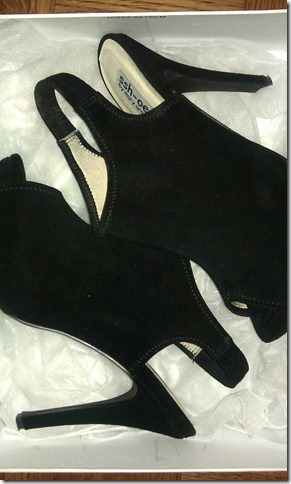 I received the Kate sling back, peep toe bootie ($149 at Ssh-oes.com). The style was pretty sleek & simple. Still, black suede seemed a bit heavy for spring. Just as they arrived, though, the temperatures took a dip, so I paired them with some mustard colored BDG jeans and my Funtote bag (with which I am currently enamored) and took them out on the town for a day. 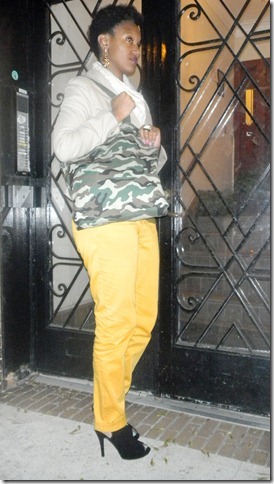 I walked at least eight New York blocks and up and down quite a few flights of stairs. 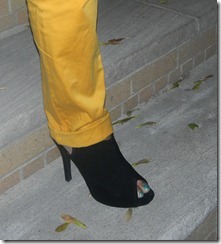 Style- 3.75 They’re simple enough for work looks and grabbing drinks with the girls, but I like shoes with a bit more za-za-zoo (in the words of Carrie Bradshaw). Still, if I can figure out how to keep them from turning my feet and my clothes black, I’ll wear them again.

Comfort- 4 They don’t require a balancing act to walk, the rubber that makes them so quiet also seems to absorb some of the shock from the heel strike and the neoprene lining feels quite sock-like. However, the lack of cushioning under the ball of the foot, the toe opening and the tight elastic on the sling back keep them from getting a perfect score.

That said, aside from the color bleed concerns, they get my general approval for folks who don’t plan on walking 6 city blocks in them, especially if you work in an office without carpeting.