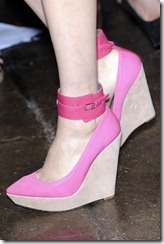 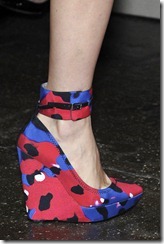 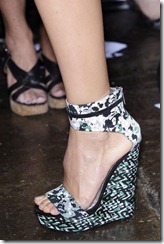 Few designer labels are as “New York” as DKNY. It’s no surprise, then, that its runway collection was presented on the 10th anniversary of the 9/11 attacks. There’s also no heel silhouette more city-smart than a wedge (except a flat, but who wears those? lol). Any woman who’s navigated the cobblestones of the Meat Packing District or walked a city block in stilettos will tell you that. Therefore, it’s also fitting that DKNY’s shoe collection consisted exclusively of high platform wedges. There was even one in red white and blue camo- either a fitting tribute, or an eerie reference to a tragic day, depending on your perspective. 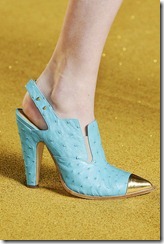 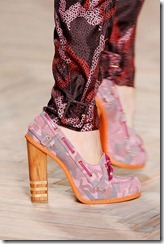 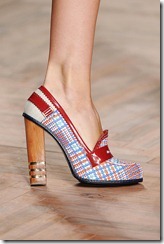 The king of preppy cool’s Spring 2012 RTW collection was a nod to 60s mod with a bit of Pop thrown in. Think glen plaid in blue and orange, bright stripes and kick pleats. On the models’ feet? Boat shoes and loafers- but with high wooden heels and in eye- catching prints. Hilfiger also did camouflage, but his was pink.