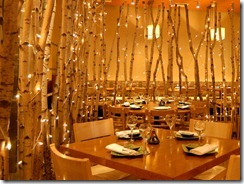 Let’s say you’re in Times Square, and you decide you want to catch a good happy hour nearby with friends, but you also want to eat something other than typical bar food without it costing a lot. A first thought might be to walk down to 8th Avenue in search of something fun. However, a better bet would be to check out Haru Sushi near the corner of 43rd Street and Broadway. Well lit, casual and surprisingly affordable (especially considering its location), it’s great for hanging out without having to get glammed up.

I was recently invited to try a few drinks from their Fall sake cocktail menu (just in time for Global Sake Day on October 1), and my taste buds were quite pleased. 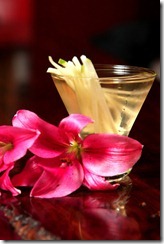 First, there was the Ultimat Saketini ($12), a crisp concoction comprised of Ultimat Vodka, sake and plum wine. It was potently refreshing, and though one isn’t really supposed to eat the garnish on a drink, I couldn’t resist the sake soaked cucumber shreds. Call it the antidote to post-office tension. 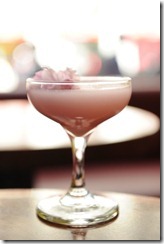 Next I tried the Cherry Blossom ($12), which combines Svedka Cherry Vodka, nigori sake, peach puree and cranberry juice. I’m normally not one for really sweet drinks, but this one managed not to be syrupy, so it was cool. If you’re into girly drinks, this one is for you. However, it’s also one that’ll sneak up on you if you drink too many too fast. 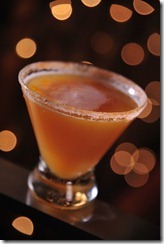 Lastly, there was the Mr. Beam’s Sake Cider. Since I’m a bourbon gal, I was especially looking forward to tasting this combination of Jim Beam Black, Reiko Cold Sake and fresh apple cider. The bad news was that they were out of cider. The good news was I had a skilled bartender who was able to whip up a very tasty substitute (which I’ve heard may now get added to the menu). The drink I tried substituted fresh pressed apple juice for cider and added bitters and ginger ale.

Ladies, I’m not sure if this is the place to go cruising for guys, but it’s definitely a spot for great drinks in a laid back atmosphere, whether you’re coming straight from work or stopping in before a night out.

For more information on Haru Sushi, its menus and locations, visit HaruSushi.com